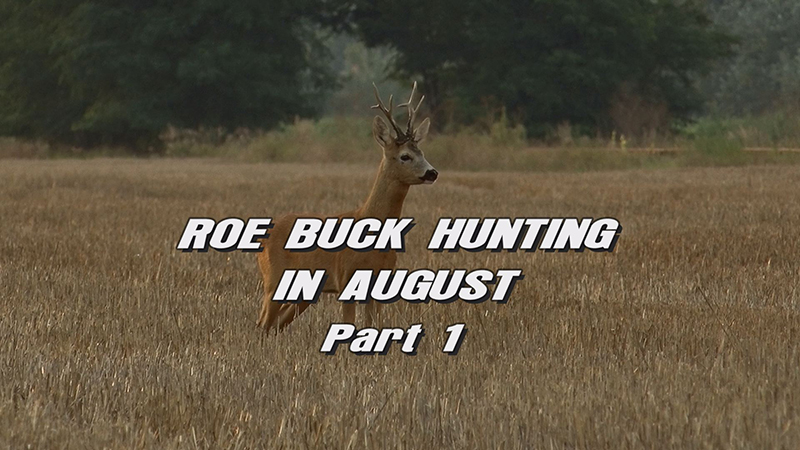 From mid-summer the roe buck starts to examine scent-traces left behind by mature females with an ever-increasing interest. Because of the hormonal changes in the body of does, scents emitted by them become more and more attractive for bucks and awake the dormant instinct of reproduction in them.
The mating season or rut of roe deer starts. This is always an anticipated time for a hunter, since the special atmosphere of the call makes roe buck hunting in August one of the most beautiful experiences.

Daytime activity of roe bucks increases significantly from mid June. They spend the timespans between feeding less and less with resting. They patrol more and more restlessly and check scents on their territory. They are looking for left-behind traces of intruding rivals and does ready to mate. The male sex hormone production of the roe buck reaches its peak during this time. The testicles swell and the urine has an obtrusive testosterone smell. The buck marks the expropriated territory with the excretion of its special scent glands. The so-called forehead glands can be found close to the pedicles. The roe buck scrubs its head to trees and bushes to rub the odor on. This dominant behavior has stress relieving and power play functions as well besides scent marking. While walking, the buck constantly rubs the excretion of its metatarsal glands onto the vegetation. It rubs the excretion of its interdigital glands found in the interdigital cleft onto the ground and vegetation with strong scraping.

The dominant buck jealously protects its does and its supremacy. With its aggressive appearance it quickly puts the weaker intruder to rout. However if specimens of the same weight-class meet and none of them backs down, they knock together with strong desperation to fight for the privilege of mating.
The victorious buck chases the doe close to mating more and more vehemently, even for days. The roe deer is a so-called monoestrous species so it exhibits estrus only once a year and the period of ovulation is only 1.5-2 days long. The doe is only willing to accept the buck during that time, so the buck persists besides the chosen one uninterruptedly.

The persistent following and chasing of the buck in heat finally overcomes the resistance of the doe and the mating happens which is repeated several times in a 36-40 hour period. The buck takes its heels after the task is completed to look for another doe exhibiting estrus.

From the second half of July the hunter roaming the grounds can find more and more scraping marks left behind by roe bucks. Beacuse the buck keeps its territory it is worth to try calling it. However the ruler of the territory often has a press of business elsewhere so only one of the other younger bucks lurking around nearby will come in.

It is also worth to be in ambush close to the scrapings at the edge of the cornfield because the buck often drives its doe out to the neighbouring stubbles even during daytime.

It is a clear sign that the rut has started when the doe stays constantly in the company of the buck. They spend their feeding and resting time together as well. When the doe is fed up with the bugging closeness of the buck and wants to go on its own or in a different direction, the buck follows it or gets in its road to keep the doe within its reach.

During the time of roe deer rut hunters use calls in different situations and ways. Most typically they go into cover and mimic the call of the doe or fawn to lure in the hiding buck.

For the hunter the most telltale clue of the start of the rut are irregular circle shapes trampled into the vegetation which are called devil's rings or witche's rings. These trampled rings appear when the vehemently courting buck in heat chases the exhausted doe unable to escape but exhibiting estrus round and round just before mating. Before mating the buck totally locks out the outside world focusing only on the doe so it is not even worth to sound the call.
The rutting chase of roe deer can not only happen at dawn or in the evening but any time of the day, even during the hottest, early afternoon period. If the buck feels that the time has come it does not leave the doe's rump patch and chases is chosen one until it does get the well deserved reward for its persistence.

The summer heat at the end of July and the beginning of August does not discourage roe deer mating at all. If the calls are sounded in the right place and time in the right manner and the love-aspiring buck is within hearing range it will show itself for sure.

It is not worth to wait for more than 15-20 minutes in one place but rather to try as many places and cover the greatest area as possible to find the buck with the desired trophy. The roe deer call in August is a great opportunity to come to know the bucks of the hunting ground and to assess antler quality. During this time even those old savvy bucks can be lured out which live their secret daily life hidden from the hunter's eyes.
A very important rule of roe deer calling is that the hunter must find cover before starting to call, so the approaching buck cannot find out the swindle early on.

If the hunter manages to blend into the surroundings and is able to wait motionlessly, patiently and can use the call realistically he will have exciting experiences for sure.

On the Hungarian Plains there are several areas where the agricultural crops are grown diversely on smaller parcels. These are varified with forest patches and bordered by channel banks with thick underbrush providing an ideal habitat for roe deer.

The hunter can feel like in roe deer-heaven if he wants to stalk-hunt his august-roe buck.

Thanks to the exceptional roe deer population of Hungary and the successful work of excellent professionals managing it, roe deer hunting is very popular among domestic and foreign hunters alike. In Hungary roe bucks can be hunted for almost half a year. The hunter can have numerous opportunities to take one from mid April to the end of September.

However Mother Nature only gives us the opportunity to take pleasure in the mating show of roe deer for two weeks. The hunter has the opportunity to infatuate and shoot the august roe buck in heat wearing its red frock with persistence and a little fraud only during this short period of time.