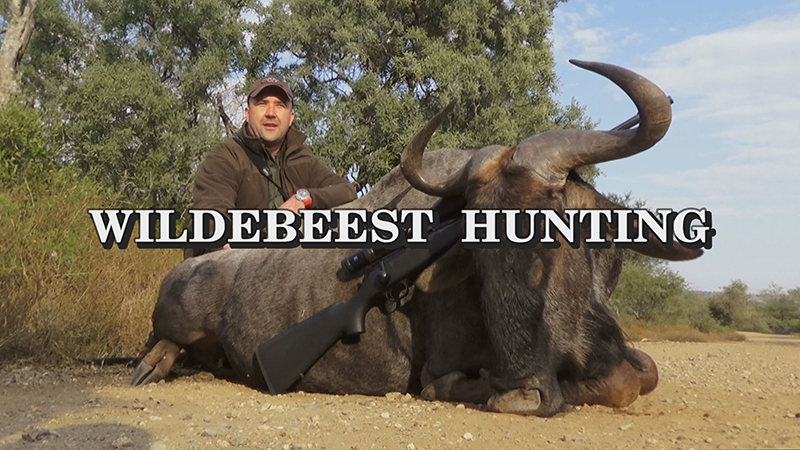 Large antelope species account for a significant portion of Africa’s incredibly diverse large game stock. There is another species, however, which taxonomically belongs to the Alcelaphinae subfamily, but its appearance is more akin to that of a smaller buffalo. They roam Africa’s savannahs in vast herds and graze undisturbed in the company of other herbivores. The wildebeest is the exclusive resident of the African continent and has several subspecies. The more rare white-bearded wildebeest is native to Northern Tanzania and Southern Kenya.

The striped or blue wildebeest with darker tones is the most common subspecies. It has greyish-brown hair, while older specimen have bluish-grey tones. The neck and shoulders are often patterned with darker, vertical stripes. The bulls can be up to 1.5 meters tall at the withers, and they may weigh up to 300 kilograms.

The wildebeest’s lean muscles make it incredibly tenacious. It is capable of standing up even after a perfect lung-shot and fight for survival for long minutes. The wildebeest herd is rather tight-knit. If one of them is in trouble, the others gather around and try to support their wounded mate.
For the wildebeest to be taken down immediately after a shot, the hunter must hit the beast’s cervical or spinal vertebrae. When that happens, the game collapses to the ground. The hunter, however, must still quickly reload and be ready to take another shot.

The bullet will often hit but not break the vertebrae. The grounded game can regain consciousness after a few seconds and escape.

The white-tailed wildebeest has dark brown hair, but older bulls may even be jet black. Its relatively large head is covered with shiny black hair. It has brush-like, vertical mane on its nose. In the case of older animals, the base of the bull’s horns, similarly to that of the cape buffalo, is completely grown together, forming a shield-like helmet covering the top of their heads.
A strong herd mentality is genetically coded with the wildebeests. Whether they live in the thicket or the open savannah, gathering in herds and enjoying the security that the herd provides is indispensable for these animals. The herd is almost always on the move. Even when feeding, they merely slow down and continue to head forward with small steps while grazing. The herd may vary significantly in number. Smaller groups with 20-30 animals are common, but at times of migration, there are giant herds numbering in the thousands. The larger the wildebeest herd, the more sentinels the hunters must trick to be able to make a kill.