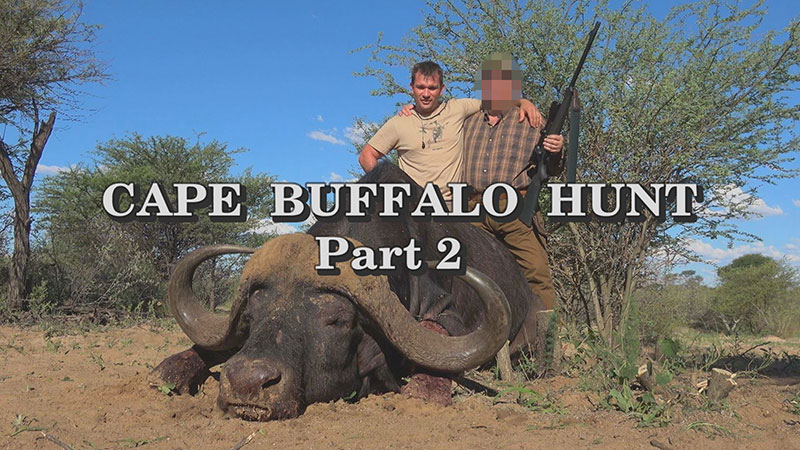 The impressively abundant wildlife of Africa lures thousands of trophy hunters to the black continent every year. Besides the popular antelope safaris, many crave the thrill of hunting dangerous large game. One stands out among the African large game that are also dangerous to humans. The cape buffalo is perhaps the one that makes European hunters’ hearts race the most and justifiably holds its prominent position on the Big Five list. Its tenacity and vindictiveness makes it truly one of the most dangerous large game species of the world. They typically roam in extended herds, which only adds to their might and resolve. Taking an old bull with giant horns is a massive adrenaline rush, making the cape buffalo hunt an unforgettable experience.

A larger buffalo herd can number up to hundreds of specimens. The seemingly peaceful, grazing and ruminating group always includes sentinels, however, who are constantly on the lookout. Hunters must tread very carefully in order to be able to approach the herd and select the largest bull.

The buffalo is an incredibly tenacious game and often races away after the first shot. The hunter must try to stop the wounded game before it reaches the thicket. If he can’t, he has no choice but to go look for the wounded buffalo in the bush.

Buffalos tend to spend the hot daylight hours in the scrubby shade, ruminating. From the late afternoon, however, they enjoy grazing in the open grassfields. Here, a duly cautious hunter can easily approach the herd and pick the bull with the largest horns.

The savannah’s high grass and thickety landscape, however, makes the hunter’s job much more difficult. Here, if the bull is not brought down by the shot, it will swiftly escape into the thicket to mingle with the herd. The green shrubbery doesn’t allow more than a few meters of visibility. Following a wounded bull under such circumstances is incredibly dangerous, even if the hunter is certain that the animal got shot fatally, and they have given it sufficient time to die.
A cape buffalo is not easy to bring down with a single shot; not even with the largest caliber rifle. It will keep fighting for its life long after being shot even in the lung or the heart. Only a head shot or a shot damaging the cervical or spinal vertebrae will bring it down immediately.

At the end of its agony, the buffalo will often give out the so-called roar of death before slowly falling silent.
Approaching the buffalo herd hiding in the dense thicket and selecting the bull with the most compelling trophy is both difficult and dangerous. The hunter must reload right after the first shot and keep shooting as long as the buffalo is still standing. However, the buffalo often throws itself into the bushes after the first shot, and instead of escaping, it attacks the hunters.

The denser the thicket that the hunters need to go through to get close to the buffalos, the more dangerous the hunt. The vegetation prevents the hunters from seeing how many buffalos are in front of them and where they are exactly. A small shift in wind direction is enough for the buffalos to smell the human scent and send them fleeing. If they happen to start running towards the hunters, the adventure can quickly turn into grave tragedy.

Hunters must have large caliber rifles in order to be able to kill the cape buffalo. 416 would be an ideal choice, but many opt for even higher calibers. What is certain, is that using anything below a 375 Holland & Holland would be irresponsible for enraging a colossal 7-800-kilogramm muscle mass.

Out of all the African large game, the wounded cape buffalo is one of the most dangerous to track down, second only to the leopard, and this requires the highest degree of caution for the guides. There’s a reason why the 7-800-kilogramme buffalo in its agonising rage is called “the black death” by African hunters. The severely wounded buffalo craves vengeance, and if its power persists, it will destroy its enemy at all costs. This is why following a brief escape after the shot, it often circles back in a loop and hides quietly in the bushes close to his path to ambush the hunters following the blood trail.