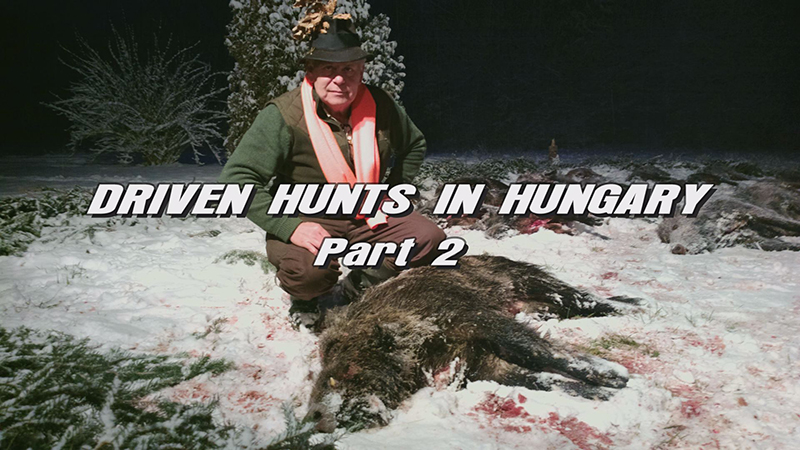 The wild boar is truly a prolific breeder as well. Under optimal conditions, the mature sow can have up 8 - 10 squeakers in one litter. Since they have no natural predators in Hungary, in the absence of intensive hunting, the population of wild boar would multiply very quickly in a short time. This would put a great amount of pressure on the environment, not to mention increased crop and forest damage.

Decreasing the population of wild boar is an important task of game management, so from November onwards, game managers work to control the wild boar population with driven and silent beat boar hunts.

In Hungary, group hunts of big game must abide by a set of regulations. Before the start of the hunt, safety instructions and maps showing the direction of the drive and other important information are given to the hunters. The information leaflet must also contain a phone number to call in case of emergency. Only hunters with a valid gun license and an annual hunting permit, and in the case of foreigners a hunting license, are allowed to hunt in Hungary. Hunters who have drunk alcohol or taken any other mind-altering drug are expressly forbidden to participate in the hunt.

During the briefing, the leader of the hunt assigns each of the hunters a partner who will lead them to the hunting area, shows them the direction of the drive, and presents the forbidden and safe directions of fire. Hunters may only load the gun when they are at the hunting stand and only right before they are ready to take the shot. In the interest of safety, a clearly visible notice of the forbidden shooting directions is posted on tree trunks.

The hunters are cautioned well in advance not to take a shot when they see something moving in the thicket because that movement could be the beaters. A well organized and disciplined beating line has the key role in a driven hunt. Another essential participant in a successful driven boar hunt is the well-trained dogs. In Hungary, mostly terriers of different breeds are used for this purpose, but almost any dog, non-purebred as well, can be used to take on this rather dangerous task if the dog is small and nimble, perseverant and brave and has the passion for hunting.

The hunt leader lists the game species that can be taken in the driven hunt. Both for hunters on a drive and for silent beat hunters, the "star" of course is the wild boar, of which hunting is allowed for any age and any gender. Occasionally the host may ask the hunting party not to shoot on old, mature sows, which are leading the sounders.
On a driven hunt, besides boar, hunters are allowed to hunt predators such as foxes and golden jackals.

If the population of deer also needs to be culled in the same hunting area, game managers may organize a silent beat instead of the driven hunt. In this case, besides wild boar and the predators, hunters may hunt antlerless deer as well but the use of dogs is not allowed.

Antlerless fallow deer, mouflon ewe and lamb may also be hunted on these silent beat hunts. Where appropriate, the host can allow the hunting of roe deer does and doe kids as well. However, a hunter may only shoot a roe kid if he can identify the gender with certainty. In fact, the bucks begin to cast their antlers in the winter season while the buck kids are just beginning to grow theirs and they can only be seen from close up.

The hunter is not allowed to leave his hunting stand until the end of the drive. During the drive, the hunter may not go off alone in search of game and should wait for his guide with whom he can begin the search.

Wounded animals that have fled to the bushes are taken by the professional hunters. Field dressing of the animal should be carried out immediately in order to prevent the precious meat from going off. Finally, the game that has been shot is brought to a common area where, according to tradition, the hunting day is closed as hunters pay their last respects with displaying the taken animals on the ground.

Hunters use a wide variety of caliber rifles on a driven hunt. Most of them have a preference for large caliber guns and bullets that are considered to have stopping power and which don't expand as much as other bullets. The use of 7 mm caliber or less guns on a driven hunt is not advisable.

For scopes, if a hunter is within a distance of 80-100 m, lower magnification scopes that have a wider field of vision are recommended.

If the hunter is shooting on more wide open space at a distance of 100-150 meters, or even further, then a large magnification scope is recommended.
Even before the start of the drive, a hunter should be sure to check that the scope is at the optimum magnification setting.

On a driven hunt, it is always a good idea to have a lot of spare ammunition on hand. It is better for a hunter to take home unused bullets than to bear the shame of having an empty gun and not being able to do anything when a large group of boars make a mockery of the unprepared hunter. Don't keep bullets in an inaccessible place like a backpack or the inside pocket of a jacket. The bullets should be easy to reach when they are needed. An extra full magazine can come in handy in sticky situations.

In a driven hunt usually deer move first. In most cases, even before the drive has begun, the deer are alerted by the sound of the vehicles, dogs and people and they immediately make a break for it. In Hungary, whether on a driven or silent beat hunt, it is forbidden to shoot any stags.

When on a silent beat hunt, antlerless deer, namely the hinds and calves can be shot although the leading hind and the calf following her should be spared. The hunter should instead choose one of the stragglers in the group.

Like red deer, roe deer also flees much earlier than the boar. While the does can be hunted on a silent beat, the fleeing females to an untrained eye are not easy to distinguish from the bucks which have no antlers at this time of the year. A hunter must only take the shot if he is absolutely certain it is a female.

In the case of mouflon, the rams with horns are not allowed to be hunted. Only the ewes and lambs can be shot. Foxes can be shot, although many people do not exercise the option for fear that the noise of the shot might drive away an approaching boar sounder.

Developing the strategy of a successful driven boar hunt, as well as its smooth execution, requires careful preparations and a high degree of expertise and precision from the game manager. On a well-organized boar drive, the hunting association host must consider the terrain, the prevailing winds and the game's most frequently used paths. Gun positions need to be designated both in order to minimize the risk of accident and to give the hunting guests the opportunity to take a shot on, or at least see, the game. After all this, there is just the hunter’s luck, and the skill of the hunters that will determine how big will the hunting bag be at the end of the day.

Sometimes a fleeing boar that has been shot shows no sign at all of having been wounded. Often during the winter when the boars have properly gained fat and their fat layer is much thicker, a shot to their side results in the wound immediately clogging up and preventing the blood from flowing out quickly. In this case, the bullet causes the wound to bleed into the abdominal cavity. So a boar like this, without having lost all its blood pressure, can disappear at lightning speed into the woods and maybe it will get a few hundred yards away and only then starts to bleed. If the bullet does not hit the vital organs, a wounded animal can escape up to several kilometers away. In this case, the job of a bloodhound with a good nose becomes indispensable.