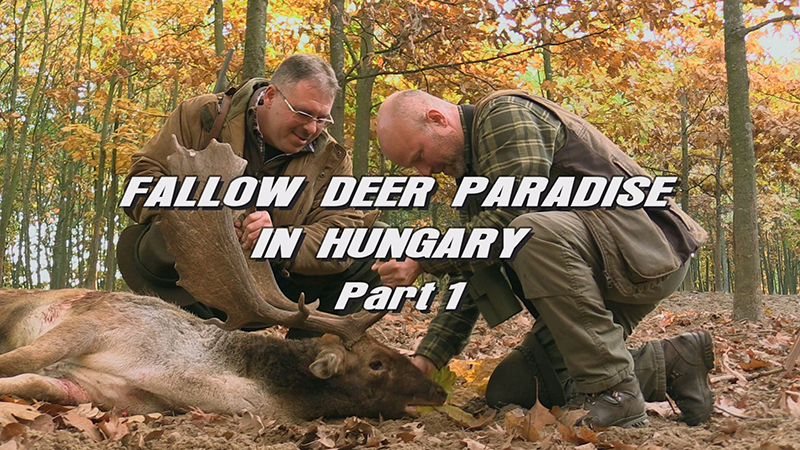 With each passing day, the forest becomes more colorful and with the arrival of October, the Gúth forest brings its most beautiful and most anticipated celebration ... the fallow deer rut.

With the approach of mating season, the increasingly excited fallow bucks slowly head to their usual rutting stands. As they move, they examine the scent of the females and the would-be rivals in the area.

When a buck finds an area he thinks is optimal, he will begin to make his rutting stand. With his front legs he scratches a small trough in the dirt and will leave some bodily fluid in the trough so as to better mark his territory with the scent. This scratching, along with the wafting scent and his groaning, is how he intends to lure females in heat to him. When the area is sufficiently marked and he feels as though he has ownership, with tremendous groaning, he will bellow out a call to willing females.

The does, both by nature and by the commanding sound of the call, are drawn to the rutting stands and will choose a mate from among the bucks gathered there based on how good their traits are.

The bucks with the largest antlers typically have their stands in the center of the rutting ground, which means that most females will also be drawn to this area where they will find the buck with the best qualities. The more attractive a buck's sound, appearance and behavior, the more does will be drawn to him.
Younger and weaker bucks are forced to the edges of the rutting ground because their older and stronger rivals have secured the best, more interior stands for themselves.

Since there are too many contenders for the really great rutting areas, conflicts inevitably arise between bucks. They must continually defend their stands against the constant stream of would-be intruders. At first they only march back and forth in parallel, measuring up each other's strengths. If neither of them back down, they can fiercely clash and demonstrate their fighting ability.

The October mating season puts a serious physical strain on the bucks. The constant noise without end, constantly checking the nearby females and getting prepared for mating can all be very energy consuming for a buck. And of course they must maintain control over the rutting stand at all times. This of course leads to many battles with rival bucks of the same weight class. This constant activity goes on for weeks, 24 hours a day, and is a test of the stamina of the bucks until the very end of the season. In addition to this, the calories they burn during this period are not replaced since they don't eat much during this time. It is therefore not surprising that by the end of the rut, the more active, dominant bucks can have lost up to a third of their body mass. The does ready to mate gather around the bucks and let the bucks walk around them, sizing them up and smell the scent of their heat.

When a female is ready, she raises her tail and puts it to the side and then slightly rears her hind legs. This is the sign to the buck that he is allowed. The October fallow rut is the biggest event in the Gúth forest. During this loud, passionate union between male and female in which the instinct to procreate will cancel out everything else, it is still very important for bucks to follow rules of conduct. Their sense of danger is significantly reduced and their attention is almost entirely on the doe and the mating process. It is no coincidence, therefore, that for hunters this is the best time to try for the best looking bucks.
However, the task is not as easy as one might think at first. Although the bucks are focusing their attention on calling, courting or even fighting, their sense of smell is still sharp and they will turn immediately if they sense the scent of human. Not to mention that the large dominant bucks are constantly surrounded by a multitude of does and young so during the rut, they remain vigilant while mating and will notice a hunter who doesn't take enough precaution when approaching from far away. The hunter who manages to come across bucks fighting or about to fight is very lucky indeed. With a favorable wind, a hunter might have the chance to get close enough to a buck to be able to size up the antlers and, if the hunting guide gives the go ahead, try to take the buck.

In the most popular areas, known as the main rutting stands, a large number of bucks gather for their noisy October honeymoon.

In these more popular rutting stands, the animals, both bucks, does, and young are constantly on the move and this makes it difficult for hunters to approach undetected.

Even with the high quality and density of the population in Gúth, one should not imagine that every buck that passes in front of a hunter is huntable. Sometimes, however, it can take several days of stalking and searching before a hunter sees a good buck to hunt. The hunting guide must consider the buck carefully before he authorizes a shot. Sparing young and middle-aged animals that are in good health allows strong bucks to sufficiently grow older. When they are 10-11 years of age is the best time to hunt them as the antlers are the most beautiful and mature, much to the delight of hunters and wildlife managers.

At the most frequented rutting stands, more than 100 fallow deer may gather at the peak of the rutting season. The great comings and goings, wanderings, fights and constant noise constitute a truly exceptional experience for hunters who have not yet had the opportunity to experience the spectacular nature of hunting fallow in larger densities out from an enclosure.

The average person might believe that in such circumstances, bagging a fallow buck is easy. However, for the hunting guide it matters which buck will be hunted with the guest hunters.

When the fallow deer are on parade during the rut, one must select the buck that can be justifiably hunted based on both the age of the buck and the quality of its antlers. An important aspect of this is that the size and shape of the antlers on a given buck meet the criteria of the guest hunter. It can easily happen that the right buck is only found after numerous tries meaning that a hunter has to go out every morning and every evening and keep trying until he finally attains success.

After taking this big dominant buck at the main rutting stand, a few hours later, another excellent buck comes to take the place of its fallen comrade. This is why the wildlife managers constantly monitor the best places so that they can be up-to-date on the location of the bucks with the largest antlers.
During the October fallow deer hunt, the majority of hunters would like to harvest bucks that have symmetrical, full antlers. However, there are plenty of others who don't like regular and typical antlers, but rather favor abnormal, unusually shaped antlers or abaiters that have been altered by time on a mature buck.

The fallow deer, thanks to high adaptability, has found suitable habitats in many parts of the world. The deservedly famous Gúth deer population is still unique in its genetic traits because nowhere else in the world is there such a great population of fallow deer. Of course, adaptability and a suitable habitat alone would not be sufficient to produce such a great population; the quality also depends on the dedicated work of the excellent wildlife managers. It is mainly thanks to their work that this hunting ground has produced the most gold medal fallow trophies in the world.

The area's reputation year after year continues to grow as more and more hunters come to hunt and take excellent fallow trophies in Gúth, a real paradise for fallow deer hunters.