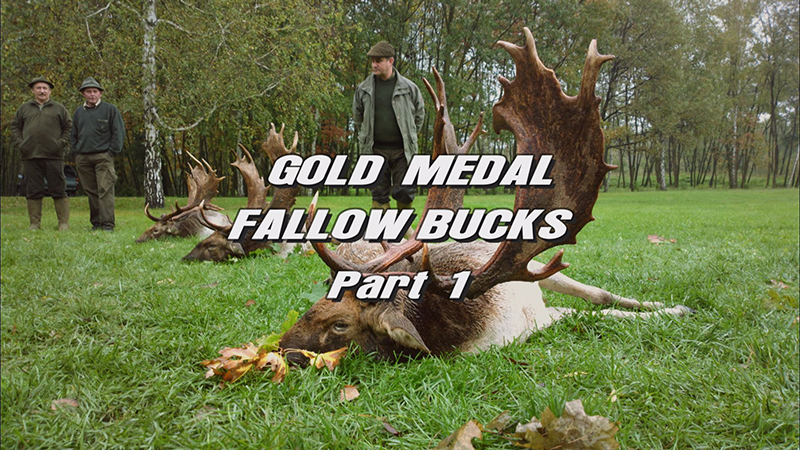 Of all the months of the year, October is when the colours of Hungarian forests are most vivid. Fallen leaves fill the forest with a cornucopia of colours while trees with leaves in shades of gold give a festive atmosphere to the forest. It is almost as if nature, by decorating the forest so beautifully, was intentionally announcing the arrival of the rutting season of one of our most noble game species, the fallow deer.

Starting in the second half of September, fallow bucks, who had been docile up to that point, stop being so calm in the herd and increasingly become agitated with one another. Rivalries begin to flare up in competition for first rights. In obedience to the command to preserve the species, the bucks are compelled to return, year after year, to their traditional rutting stands where those in the most advantageous positions will have the best chance of mating.

In a single rutting stand, there may be one or more scrapes on the ground as the buck marks his territory with his glandular secretions. A buck might use a well-known, frequented stand for several years, but may also scrape out a new one. The bucks constantly stay in or patrol near the scrapes as they let off a non-stop litany of groans and snorts trying to entice estrus does. In the case of the fallow deer, estrus females seek out rutting bucks and choose their mates based on their appearance and behaviour. Whether a fallow buck will have success in mating depends on several factors. The sound of their call, the size of their antlers and body, as well as the strength and determination with which they defend their stands all factor into whether they will be chosen by a doe to mate. The bucks often clash over the best rutting stands and for the grace of the females. The clashes are sometimes tests of strength, but serious injuries are common as are bloody struggles. The fallow deer rut in October is one of the most beautiful celebrations in the forests of Hungary and stalking and taking a fallow buck is one of the greatest hunts that can be done. During mating season when master bucks have succumbed to the burning desires of the rut, they can only be reached by sneaking past the younger bucks and females encircling them; this task requires a great deal of patience and caution from a hunter. And if a hunter is lucky enough to be in a first-class hunting ground and is able to take a carefully selected great trophy buck from a high-quality population, it is sure to be the hunt of a lifetime.
Between 1970 and 1980, a reintroduction program was instituted in Hungary and this led to an explosion in the population of fallow deer. This growth in the fallow population was also helped by an increase in reforestation efforts as well as an increase in crop production but the particular characteristics of the fallow deer also played an important role in the increase of their population. The fallow deer doesn't have a particularly demanding diet and as such, can thrive in sparser habitats as well. The fallow deer has good reproductive capabilities, maintains its habitat, is less sensitive to stress and can bear a higher individual density within a herd. The fallow deer gets along well with other species which is why they are popular on hunting reserves. If fallow deer can find sufficient nourishment, they can survive harsher winters in relatively high snow as well.

At present, there are high-quality fallow deer populations located in six counties in Hungary. In these areas, during the October rut, the forest is alive with the sound of fallow bucks. The names Lábod, Gyulaj, Pusztavacs and Gyula probably sound familiar to European fallow deer hunters. Although there are many excellent hunting regions in Hungary, there is one that stands out; one which, because of thoughtful planning, consistent and highly professional game management, as well as favourable habitat conditions, has perhaps had the greatest influence on strengthening the Hungarian fallow deer reputation worldwide. Of course we are talking about the fantastic hunting ground of Gúth whose fallow trophies today proudly sit in the world's top two places. This is the only hunting ground in the world where the seasonal average weight of antlers is well over 4 kg and where an impressive evening take is a daily occurrence during rutting season.

In the north-eastern part of Hungary, in the region known as the Nyírség, the Nyírerdő Zrt. (Nyírerdő Forestry Company) maintains and manages the wildlife on 60,000 hectares of state-owned forest land in Hungary. This is one of the most important units of the state forestry's hunting sector and it manages the 14,000 hectare Gúth hunting ground. This territory is more than 70% forested and the heart of this forest is the 5,200 hectare Gúth Forest. The Gúth Forest is approximately 30 km northeast Debrecen and is currently one of the largest contiguous forests on the Hungarian Great Plains where, in addition to rare plant communities, the region is also rich in wildlife.

Fallow deer was introduced to the region in 1972 and it was an excellent decision because, in addition to being placed in the surroundings of birch planted in the sandy and brown forest soil, the region also natively has old oak, pine, poplar and black locus groves which proved to be a first-class habitat for fallow deer. The farmland around the Gúth Forest is dotted with reed thickets and meadows which further improve the quality of the fallow deer habitat.

After it was introduced, fallow deer quickly found a home and the population began to expand in the Gúth Forest. Thanks to the careful professional work done here, the quality of antlers began to increase within just a few years; so much so that the region, due to the outstanding quality of the gene pool of fallow deer here, gained a special distinction. The Gúth Forest is the only hunting area in the world that has won the prestigious Edmond Blanc Prize two times, which is awarded by the International Council of Game and Wildlife Conservation (CIC). With this prestigious award and the two world record fallow buck trophies, the CIC recognized the unique quality of the fallow deer population in Hungary, as well as recognized the excellence of wildlife management in Hungary from the perspective of environmental protection and nature conservation.

Every year in October, when the Nyírség Forest is dressed in its finest, most colourful attire, hunters from all over the world come to this renowned hunting ground so they too might have the chance to take one of the coveted fallow buck antlers. And they arrive at the best time as the excitement of rutting season and the expectation grow and in a few days the most beautiful celebration the Gúth Forest has to offer is soon to begin... the fallow deer rut.

During the initial stages of the rut, the sounds of deer groans can usually only be heard in the morning and in the evening but as the season progresses, the calling of the lovesick bucks continues later and later into the morning while it starts earlier and earlier in the evening. In mid-October, during the main rut, the sound of calling bucks can be heard almost throughout the whole day. The more active bucks spend 70-80% of the day calling which is very taxing on their bodies.
Since fallow buck eat almost nothing during the rutting period, they can lose 20-30 kg of body weight. The main part of the rut usually takes place between October 15 and 25 in the Gúth Forest. During this period most does are fertile, and the sound of fallow buck calls during the huge commotion of rutting reverberates throughout the forest. This is when a hunter has the best chance to take an otherwise careful large old buck. It is no coincidence that hunters take the largest and finest gold medal bucks during this period.

The excellent Gúth fallow population is abundant and offers hunting guests a choice of several large bucks, before deciding on taking a shot.

In the colourful forest of October, stalking a fallow buck, going rutting stand to rutting stand in search of the illustrious gold medal buck, is a hunting experience which you can never get enough of.