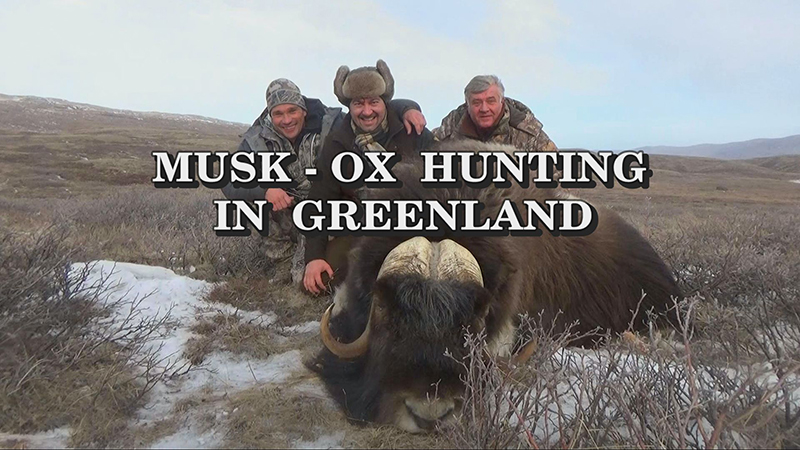 Greenland, the largest island in the world is situated North-East of Canada. It is a rocky iceland covering over 2 million square kilometers, where only the toughest creatures can survive.

The musk-ox has perfectly adapted to the bleak living conditions. It is capable of effectively utilizing the native polar vegetation sparse and low in nutrients. Under its thick, dense, long-haired fur, the musk-ox boldly defies the bitter, freezing winds and the penetrating temperatures as low as minus 40 degrees Celsius. The adult males can weigh up to 400 kilograms.

They migrate along their tried and tested routes, forming larger herds in the winter and smaller groups in the summer. They must cover vast areas to be able to scrape their meagre daily portions of food from among the snow. When the herd is threatened, they gather in tight groups and are reluctant to back down. If the herd is startled by the sound of a gunshot, they are capable of fleeing with haste. The musk-ox with its short, bulky legs, however, is not a champion of long distance running. After a speedy escape, they often take a break on a nearby hilltop. This gives the perseverant and cautious hunters the chance to take another shot at them. The musk-ox is a highly tenacious game. It can cover relatively large distances even after suffering a fatal shot. The hunter must therefore follow the wounded ox often for several hundreds of meters before taking the finishing shot.

The musk-ox has an emblematic horn, curving up then down, forming a thick shield over the forehead of the beast. This makes it a coveted trophy for many hunters, for which they are willing to brave the tough terrain and weather conditions.

They typically use a quad to be able to cover the vast hunting grounds quickly and efficiently. These vehicles can handle terrain where even jeeps would get stuck.

This means that the trophy hunters must hike for many kilometers over arduous, continuously inclining terrain before they can spot the musk-ox.
The chilling winds and temperatures as low as minus 20-30 degrees Celsius is familiar ground for the musk-oxen. They couldn’t care less of the freezing cold. The hunters, however, must be really determined if they’re going to get the trophy of the musk-ox amid such weather conditions.