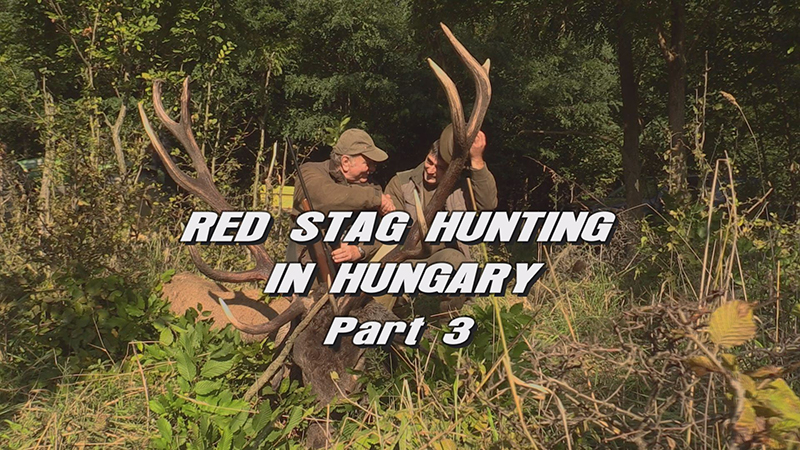 Huge corn fields bordering the forests attract red deer like a magnet which become nearly invisible in the cover of the crop. It is not an enviable situation for the professional hunter to guide a guest under these circumstances.
The situation is much better in those areas where game moves out onto pastures, game fields or low-growth crops. In undisturbed places the stag often appears even at good light conditions durng the bell providing a great opportunity for a thorough observation.

It is practical to take the ambush position one or even one and a half hours before the expected appearance of the game for an evening hunt. So the hunter will have a lot of time to take up his position and wait for the appearance of the desired stag preparedly.

Estimating the age and judging the antlers of appearing game is the task of the guide. He is authorized to decide whether to give the order to fire or to pronounce the stag to be spared yet.

In cloudy grey weather one has to gather headway even earlier because the movement of game is to be expected earlier with primy darkness. However despite all the effort of the hunter it happens countless times that game appears well after shooting light has passed.

Just like evening stand hunts, morning stalks can be effective as well. There is a good chance for the hunter to meet stags escorting their hinds or stags looking for them.

Professional hunters place high stands during the preparation for bell always prudently according to prevailing wind directions and known movement of game.

It happens often that one encounters the stag already on the way to the ambush. If the game spots the hunters as well it is hard to make a quick and responsible judging in those few seconds available.

The situation is different if the hunter moves noiselessly with good wind and spots the game first. If the hunters manage to remain unnoticed they will most likely have enough time to decide whether to shoot or to spare it.
Red deer bell and stag hunt in September are the most anticipated parts of the whole year's hunting season which is simultaneously the best indicator of the game manager's professional preparedness and economic results. It is important to finish preparation works for the bell by the end of July and to ensure the greatest calmness possible during the whole August for the deer living in the area. To this time most of the hinds lead 8-9 week old calves and the careful mother quickly takes the constant machine humming and bustle amiss. It simply takes its heels and looks for a calmer habitat. If most of the hinds leave the area because of disturbance all the invested money, work and effort will go to waste since the stags looking for hinds are not going to stay in those areas either where they do not sense the presence of hinds exhibiting estrus. In this case the failure of stag hunting during bell can be told in advance which can have a long term influence on the results of management as well. This is because most of the hunters probably return dissappointed and without a bag from grounds with a poor bell and they will not be wanting to come back next year either. Not to mention the fact that those game managers who wanted to even out their game damage debt often reaching 60-80 thousand Euros from the income of September stag hunting will be in a difficult financial situation after a weak stag season. In those areas however where preparation for the bell was done attendingly and finished in time and they were also able to provide appropriate calmness before the mating period of red deer, people can expect a successfull bell season with a good reason. The hunting ground slowly fills up with stags following hinds and hunting guests will have an opportunity to take the desired big game among fantastic bell experiences.
Movement of red stags is the most active at the dawn and dusk hours during the bell as well. In the morning they hurry to get back to their daytime hideout before sunrise from where they leave only when the evening closes in before dusk to join their harem or to look for hinds. It is mostly typical for older, more experienced stags that they only show themselves late at night and at dawn they return to the thicket before shooting light. So the hunter can hope for luck only in the morning and evening for two hours each because poor visibility of too early and too late hours make the judgment of the antlers and the firing of an accurate, aimed shot impossible. Therefore there is a lot of time and patience required for red stag hunting. In Hungary even in a good hunting ground it is worth to spend at least 4-5 days with hunting in order for the hunter to hope for a successful bag with reason.

However in Hungary there are several excellently managed hunting grounds where there are plenty of opportunities even at good light conditions to observe red deer bell, to choose and to bring down the game with the desired trophy thanks to the high numbers of deer and the calmness provided by the personell.

During mating, raging hormones make the stag incredibly tough.
A bullet fired from a weapon with an optimal caliber mostly gives well followable blood traces on the ground or on the vegetation in case of hitting the lung or the heart. The guides follow these blood trails easily where at the end the game is found usually dead already.

Trouble starts when the hunter takes an inaccurate shot at the game because of his shaking hands or incautiousness which does not cause a quick death. There is no visible blood trail at the hitting spot or it ends to be trackable with the eye.

Several dog breeds can be effective for trailing wounded game. However most of the professional hunters find the hanover hound to be the most suitable for this task. The hound follows the trail persistently with its exceptionally refined smell and calm temper. Its strong body build enables it to catch up and halt wounded game in a chase.

In Hungary daytime temperatures of 20-25 °C are not rare during the September red deer bell. Therefore it is important to gut the bagged game and deliver it to the cold-room as soon as possible.

The weight of a big-bodied stag can exceed 200 kilogramms so moving and transporting the shot game is a task for several people which can be made easier and quicker with the help of machines.

After arriving to the yard of the hunting lodge the red stag is layed out on the bag surrounded by oak twigs… finally the last honours coming to the royal game are given with the solemn sounds of the hunting-horn.

Both dawn stalks and evening stand hunts have their special atmosphere. However while during the evening stand hunt chances decrease paralell to the waning light, during morning stalks starting at total darkness, increasinging visibility promises better chances. Spotting the roaring stag escorting its hinds in September at the first break of dawn and approaching it from one meter to the other is a hunting experience that surely carves itself into the memories of the hunter unerasably for a lifetime.

Bringing down the crowned king of the forest at the red deer bell in September means the most beautiful hunting experience for many hunters. Waiting with hopes and excitement, the heartbeating moments before the shot, spotting the already passed away royal game in the wet grass and touching its desired antlers for the first time, the strange, moving mixture of feelings: the mourning because of the animal's death and the joy of success all release unforgettable feelings in the soul of the hunter. These feelings soaking deep into the being of the hunter drive him to take on the challenge during all upcoming bells and to try to bring down the most beautiful gift of the autumn forest: the roaring red stag.