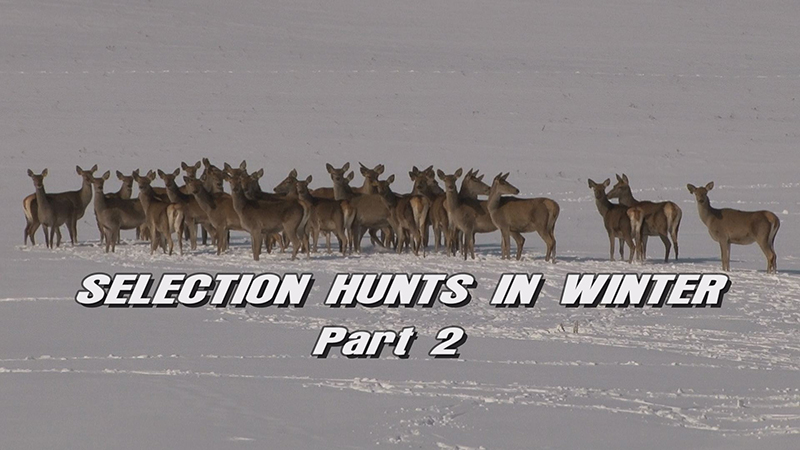 The intensity of the fallow rut in October should not be disturbed by taking a few does and fawns. During the reproduction period, the most important thing in terms of game management is that mature fallow buck hunts result in a successful take. Because of this, culling should therefore only begin after the mating season has ended. Like red deer, a sex ratio of 1:1 for fallow deer is also desired, and this ration is controlled by culling the appropriate number of does and fawns. On selection hunts, it is important to achieve the optimal age mix, which means that the greatest number of animals taken will be from the younger age group. Young bucks should only be taken if they are remarkably underdeveloped and/or have a mangy coat. The culling of deer is necessary to manage the population and for the most part, young does are the most recommended to be shoot. This is especially true because young does come into heat sooner than mature, older females and these young females bear fawns that are late in development and generally weaker than their peers in the group.
In the case of fallow deer, if you see the whole body of the animal, it is not difficult to distinguish the young females from the young bucks who have yet to grow antlers. The young bucks have a tuft of fur on their bellies and this clearly indicates the sex of the animal.

The wild boar is a very prolific and adaptive game species.
Due to extensive damage caused by the animal, domestic law permits the hunting of wild boar, without restrictions on age or gender, throughout the year. The very popular driven wild boar hunts play a significant role in reducing the boar population, but this type of hunting is not as useful for professional culling as hunts from blinds where it is much easier to judge and select the right animals.

For economic reasons, older animals, unless there are health reasons to deem otherwise, should preferably be spared. By and large, mostly juvenile individuals, piglets and gruntlings, should be taken.

The mouflon is a game species found in the higher regions of the Central Mountain Range in Hungary. This animal prefers to roam in large herds. Its home range is relatively small so it takes a significant toll on the vegetation in the area. Like red deer and fallow deer culling, for Mouflon a 1:1 sex ratio would be ideal.

In an optimal and sustainable mouflon ewe population, there are usually 15% lambs, 65% middle-aged ewes and 20% old ewes. This situation can be maintained for the most part by hunting young ewes.

The mouflon prefers rockier mountain terrain so they can be found everywhere in the Central Mountain Range of Hungary. The varied geography here results in grueling terrain, which makes a mouflon hunt challenging yet exciting even if you are hunting only for the female and young.

Roe deer is found in every part of Hungary. But most often they are found in forest patches, in reedy and grassy brush, and in agricultural areas.

For a roe deer selection hunt or culling, the aforementioned points considered for red and fallow deer are also relevant for roe deer. There is no significant difference in age composition and ratio of males to females from the other deer. During a selection hunt, hunters must be careful to take the allotted number of deer that is determined in the shooting plan with focus especially on the doe kids and old, mature does.

Of course, injured, sick, and shabby looking animals should be culled from the population.

In the case of roe deer, during a selection hunt, the main difficulty is that in the winter, the deer gather and are concentrated together in open areas around the remaining food sources, so, because of the lack of cover, it is very difficult to approach the animals.

Choosing the animal and taking the shot are often done at distances of sometimes hundreds of meters. This demands an excellent scope and choosing the right caliber as well as exceptional skills in rifle use.

What also complicates these selection hunts even further is the fact that at this time of year, the bucks no longer have antlers or you can't see the new antler stubs that have begun to form. The built and behavior can often even deceive expert eyes.

In the long run, hunting females and juveniles is more beneficial to the quality of the population than hunting males.

The females are not only actively involved in the breeding of the species, but a larger proportion of females takes part in breeding than males.

While as many as 80-90% of mature females take part in mating, (in the case of an optimal age composition of the population), only 25-30% of males are able to mate.

The young or weak males are defeated during the mating fights. When on selection hunts, older, healthier females should be spared because these are the ones that will bear strong calves. In particular the young hinds must be taken because compared to mature females, young hinds go into heat much later, and therefore give birth much later and the calves they bear are generally weaker animals. A young hind is markedly smaller and slimmer than a mature female.

Selection hunts of females and young results in fewer, but far sturdier, animals in the population. And in September during the rut, the struggles between stags are fiercer for the fewer hinds which, in the end, ensures that only the most outstanding individuals will be involved in the continuation of the population.