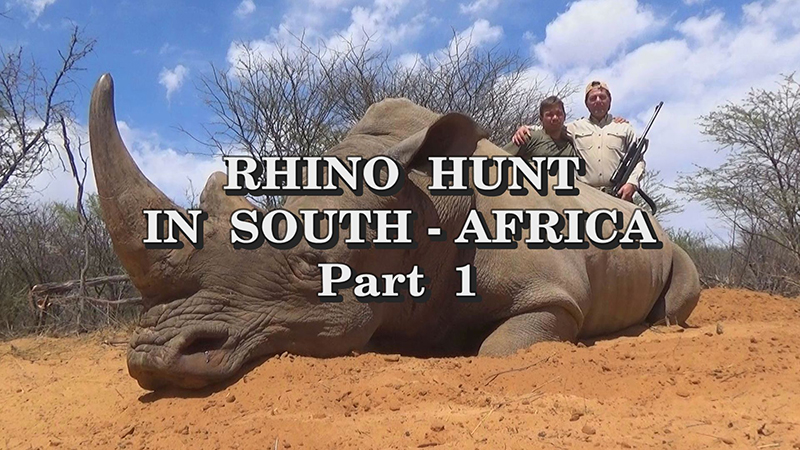 The rhino is second largest land animal after the elephant. Its 2.5-3-ton weight, sizeable horn and stern, irritable nature justifies its mention among the 5 most dangerous large games in Africa. Although its vision is not the brightest, given its sensitive sense of smell, even the smallest breeze can give away the presence of a human.

The rhino spends the better part of the day among the safety of the dense thicket. The hunters usually trace the bull’s tracks in the sand and start pursuing the beast with the help of an experienced tracker. Stalking a rhino can only be done successfully in favourable wind conditions, given its infallible sense of smell. Moreover, the tickbirds often accompanying the rhino immediately signal the approaching danger with their loud chatter. The startled rhino flees with its tail raised, but does not normally run far, (but) it stops to listen as soon as it finds dense vegetation. He often turns back out of curiosity to uncover the source of the noise. The hunters can easily incite the hefty beast to attack if they venture too close.

If the winds are favourable, a rhino can even be stalked in open field. Provided that the hunter obeys certain ground rules, he stands a good change at taking the desired bull down. The animal tends to hang its large, heavy head, further impairing its eyesight, since visibility is also restricted by the surrounding vegetation. When the rhino’s head is not covered by vegetation, the hunter must be motionless. One should avoid shooting a rhino from the front as the risk of wounding is high, and the trophy of the animal, the rhino horn, may also get damaged. The hunter should only take a frontal shot if the rhino is on the attack and he has no other choice.

The hunter must try to get as close as possible in almost complete silence. He should wait for the beast to arrive at a clearing and turns sideways to the hunter.

Pursuing the rhino in the thicket makes for a nerve-wrecking, dangerous hunt. The thick, dry vegetation creates an impenetrable living wall, fully absorbing the rhino’s grey colour and making the giant beast virtually invisible. Spotting the rhino hiding in the thicket requires a sharp eye and extensive experience. The hunters must often come dangerously close to be able to take a precise and lethal shot. If they don’t succeed for the first try, the wounded, enraged rhino may attack the hunters head on. In a terrain covered with thin, prickly bushes, quickly climbing up a tree is hardly an option. In such cases, the hunter has nothing but his rifle and his presence of mind to rely on.